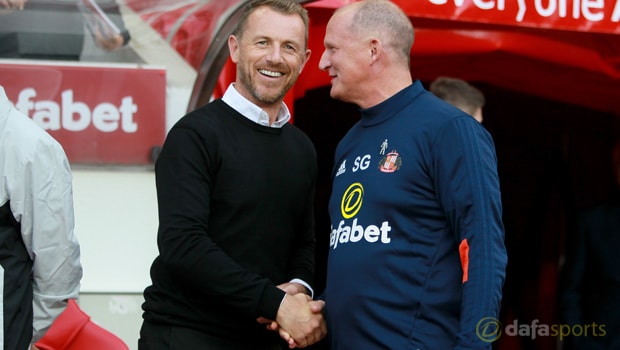 Sunderland manager Simon Grayson has urged his squad to take their chance and nail down a starting place in the coming weeks.

The former Leeds United coach watched his side battle to a 1-1 draw against Derby County on Friday night.

Sunderland fell behind in the first half but a penalty from Lewis Grabban levelled matters just before half time.

He moved from Everton for £250,000 this summer, while George Honeyman also produced a solid display after graduating from the academy.

Following their relegation last season, Sunderland are now under pressure to challenge for promotion and Grayson has urged his troops to earn their spot, with new signings on the horizon.

He told the Sunderland Echo: “We said to the players before the game you have the shirt, now make sure you have it for a long time.

“That is the basics of what the players need to do. If they play well, they keep the shirt.

Fans will take to players if they work and score goals or make tackles or put their bodies on the line.

“Hopefully over the next few weeks we have a group of 20-odd players that the supporters will take an affiliation too.”

Grayson’s side are next in action against Bury in the Carabao Cup on Thursday, before they travel to Norwich City in the league.

The Wearsiders face a tough start to the season, with Sheffield Wednesday, Leeds United and Barnsley all coming up before the end of August.