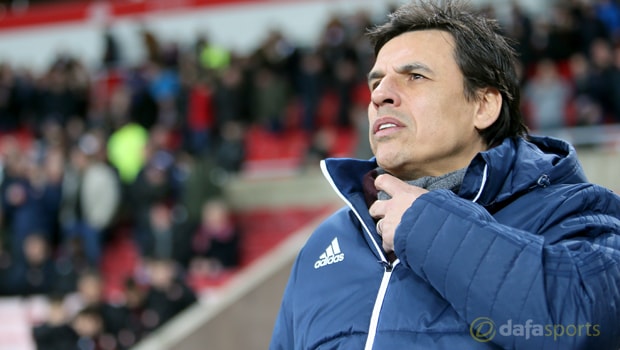 Sunderland boss Chris Coleman has confirmed Paddy McNair is a major doubt for Tuesday’s home clash with Norwich while Marc Wilson will definitely miss out.

Northern Ireland international McNair scored the Black Cats goal during Saturday’s 1-1 draw at Leeds, although he picked up a knock during that contest, while versatile defender Wilson also sustained an injury at Elland Road.

Coleman has now confirmed that McNair is a major doubt to face Norwich at the Stadium of Light on Tuesday, while Wilson has definitely joined Jonny Williams and Billy Jones on the sidelines, although Bryan Oviedo is expected to be available once again.

“Both players did very well at the weekend, but they’ve both got knocks.

“It’s highly unlikely Paddy will be available, and Marc is a definite no. Jonny Williams and Billy Jones are still not available either. Bryan Oviedo will be back available after recovering from his injury.”

Sunderland will head into Tuesday’s contest sitting second-bottom of the Championship standings and seven points adrift of safety with just five games remaining in their campaign.

Coleman admits the Black Cats have reached the stage where they have nothing to lose, but he knows they must be ready to pounce should the teams above them in the standings slip up.

He added: “We’ve got nothing to lose. We’ve been written off, so we’ve nothing to lose. If the teams above us are going to slip up, we don’t want to be left there thinking we’ve missed an opportunity.”

The Wearsiders are priced at 2.80 to secure all three points on Tuesday, while Norwich are available at 2.50 and the draw is on offer at 3.30.