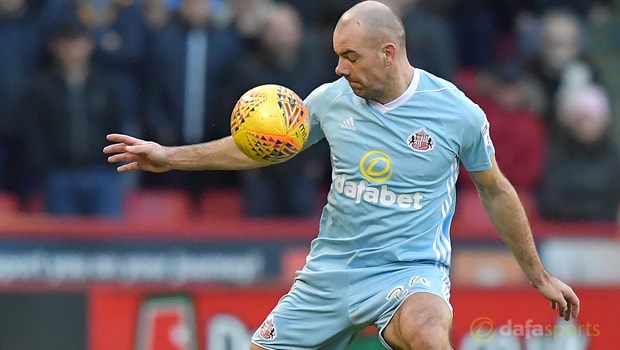 Sunderland boss Chris Coleman has confirmed midfielder Darron Gibson faces up to 10 weeks on the sidelines with a groin injury.

The Republic of Ireland international was forced off with the problem during the Black Cats’ 1-0 home defeat to Barnsley on Monday, a result that saw them slip to the bottom of the Championship standings.

Coleman confirmed after the defeat Gibson had aggravated what had been a persistent problem and he has now revealed the former Manchester United player faces an extended spell on the sidelines.

“He’s low, he’s down because in the way we want to play, he’s been key, really, and he was definitely grasping what we need from the holding midfielder in the formation we want to go with,” Coleman said.

“Now we’ve lost him for eight weeks, 10 weeks possibly, and that’s a big blow. It’s a tough one.”

Coleman also confirmed the club are seeking another opinion regarding Gibson’s injury so they can determine exactly what course of treatment the 30-year-old will need.

Sunderland are next in action when they travel to the Riverside to take on north-east rivals Middlesbrough in the FA Cup on Saturday.

The Black Cats have lost their last four meetings with Boro, including a 1-0 reverse earlier this season, but they are priced at 6.50 to secure a victory on Saturday, while Tony Pulis’ side are available at 1.57 and the draw is on offer at 3.75.