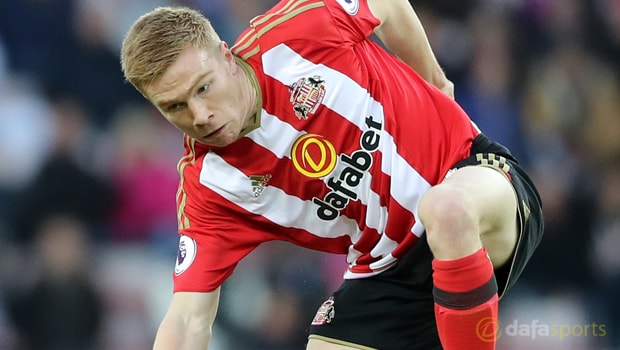 Sunderland manager Simon Grayson has praised the club’s medical team for helping Duncan Watmore to return to the first-team fold.

The 23-year-old came off the bench in Saturday’s Championship draw with Preston at Deepdale after almost a year on the sidelines.

The forward suffered a cruciate knee ligament injury last December but he is now available to boost Sunderland’s hopes of winning an immediate return to the Premier League.

Watmore recently featured in two matches for the club’s under-23 side and he was given a warm reception by the travelling fans on Saturday after being introduced with 64 minutes on the clock.

The former England Under-21 international had a big impact in Lancashire and could have won a penalty when he was caught by Ben Davies in the box.

Grayson was quick to praise Sunderland’s medical team after Saturday’s clash and also feels Watmore’s direct style will be crucial to what they want to do this season.

“Thirty minutes was going to be about his maximum,” said Grayson.

“I would have started him if I had the chance, but I have to go with the decision of the medical department.

“He showed what he is capable of doing, taking people on and getting in behind.

Duncan is going to give any team quality, with and without the ball. He has energy, guile, craft.

“But psychologically he will feel unbelievable just for having made his comeback, and the medical staff deserve a lot of credit.”

Sunderland, who are priced at 4.33 to be relegated, have won just one of their 11 Championship engagements this season and currently sit one place off the foot of the table heading into the international break.