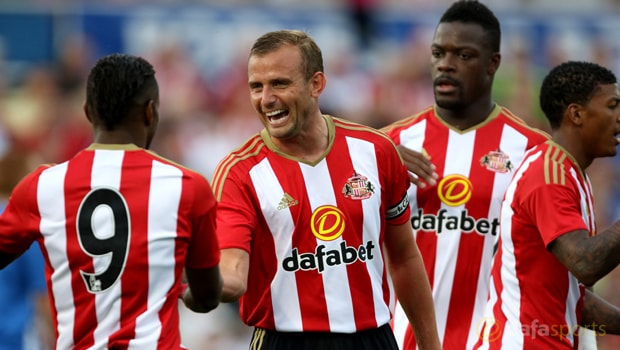 Lee Cattermole admits Sunderland have a “mountain to climb” if they are to avoid relegation from the Premier League this season.

The Black Cats are currently rooted to the bottom of the table, nine points adrift of safety, following a run of one win in their last 15 top-flight games.

David Moyes’ men do have a game in hand on some of the teams directly above them in the standings and did produce a spirited display as they twice came from behind to draw 2-2 with West Ham at the Stadium of Light on Saturday.

Cattermole believes the draw has to be seen as a point gained, particularly as the likes of Hull, Swansea and Middlesbrough all suffered defeats over the course of the weekend, although he concedes the club still have a tough task if they are to avoid the drop “It is a point gained, sometimes you’ve just got to start there,” the 29-year-old said.

“The other teams have lost so it is a point gained. It still looks an absolute mountain to climb but we’ll give it a good go.”

The former England Under-21 international has only recently returned to the Sunderland side following an injury-ravaged campaign, and admits he is not quite firing on all cylinders. “It’s difficult”, he added.

“I’m not going to hide the fact, how long I’ve been out, how tough it is and how hard it is when I’m out there to get to where I want to be at, but I’ve got to just keep going, get to the end of the season and help the team out as much as I can.”

Sunderland have six league matches remaining to save their season, starting with a relegation six-pointer against Middlesbrough at the Riverside Stadium on April 26, but they are priced at 1.01 to finish in the bottom three come the end of the campaign.