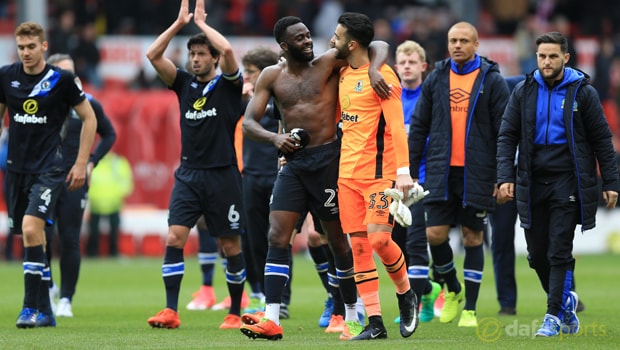 Blackburn manager Tony Mowbray has been impressed by the performances of stand-in goalkeeper David Raya.

The Spanish custodian featured in both of Rovers matches over the Easter period against Nottingham Forest and Bristol City, as first-choice goalkeeper Jason Steele was sidelined with an ankle injury.

The 21-year-old helped the Blue and Whites claim four points from those two matches and they are now just a point adrift of safety heading into the final weeks of the Championship campaign.

Raya is expected to keep his place between the sticks for Saturday’s trip to Molineux to take on Wolverhampton Wanderers and Mowbray admits he has been impressed by the performances of his second-choice shot-stopper.

“He has done very, very well,” Mowbray told Rovers PlayerHD. “I do like his alertness, his speed of movement and thought, his distribution is quick.

“But it isn’t necessarily about saving shots that makes you a good goalkeeper, it is your distribution, it is your ability to come for crosses and take pressure off the defence, it is your communication skills, it is different things really.”

Following the clash with Wolves, Blackburn face a home match with Aston Villa at Ewood Park on April 29, before they conclude their season with a trip to Griffin Park to take on Brentford the following week.

Blackburn have not played in the third tier of English football since 1980, but they are priced at 1.60 to be relegated come the end of the campaign.