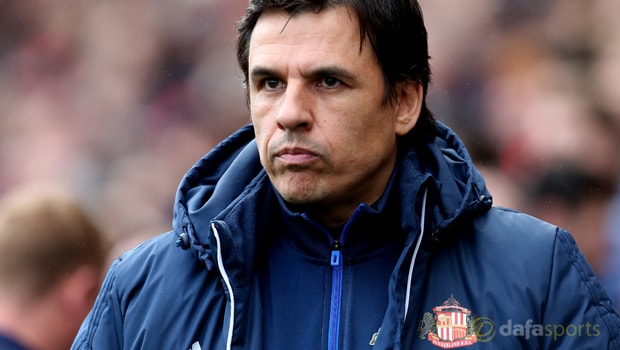 Sunderland boss Chris Coleman says there is an “edginess” to his side’s play that he is keen to eradicate.

The Black Cats have conceded 10 goals in their last four games, during which time they have picked up just one point, and Coleman feels a lack of confidence and composure is a major issue.

“We train a certain way and then when the bell rings we play a slightly different way – that’s what really bothers me,” he told reporters.

“I have to look at us and where we are and the opposition we are up against and maybe the type of characters we need in the team.”

Sunderland were without Liverpool loanee Ovie Ejaria as they went down 2-0 at home to Brentford over the weekend and Coleman felt his absence had a big impact on the Stadium if Light outfit.

The former Wales boss also believes he may have to make some changes to his side for Tuesday’s crucial trip to fellow strugglers Bolton.

He added: “Maybe I need to change certain things, take away all the emotion, look at the game [Brentford], there probably wasn’t a lot in it but we never looked like we had that belief we were going to score.

“When they got in our last third there was an edginess that they are going to get a third.

“We are missing Ovie Ejaria, someone who can put his foot on the ball and calm things down we were so nervous in possession, so erratic from the kick off, we are slashing at it, heading balls when we should be chesting it down and passing it. That is nerves and panic and you are not going to progress with that.”

Ejaria remains a doubt for the trip to Wanderers, who are four points above Sunderland in 20th spot.

Sunderland are 3.00 to claim a win at the Macron Stadium on Tuesday or a Price Boost of 7.50 to win with both teams.