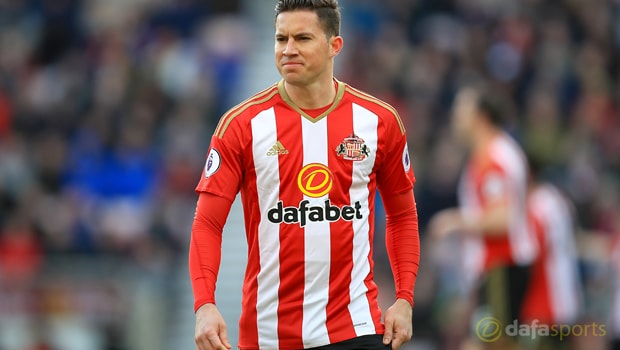 Bryan Oviedo says he will play for Sunderland in the Championship if necessary but revealed he will be keeping his eyes out for a return to the Premier League this summer.

Oviedo joined Sunderland from Everton in the January transfer window, putting pen-to-paper on a three-year deal, but the left-back, who can also play further up the flank, was unable to stop the club getting relegated.

The Costa Rica international only managed 10 league games for the Black Cats as a hamstring injury picked up in April resulted in a lengthy spell on the sidelines.

It is expected to be a busy summer at the Stadium of Light with key first-team players in the shape of goalkeeper Jordan Pickford and England international Jermain Defoe set for departures.

Sunderland are yet to appoint a new manager following David Moyes’ resignation but the name of Paul Lambert, who also decided to leave his post at Wolverhampton Wanderers on Tuesday, has been linked with the vacant post.

The new man in charge could face an early battle to keep hold of Oviedo this summer after the defender admitted his desire is to return to England’s top flight.

“I have a contract with Sunderland, it is a great team with very good infrastructure, the only problem was the relegation,” he was quoted as saying by the Sunderland Echo.

“If I have to continue in the Championship, it is a great league but I will always look for the option to remain in the Premier League.”

Sunderland face a huge task to earn an instant return to the Premier League with Aston Villa, Hull City, Middlesbrough, Sheffield Wednesday, Norwich City, Leeds United, Derby County and Reading just some of the teams battling to get out of the Championship.