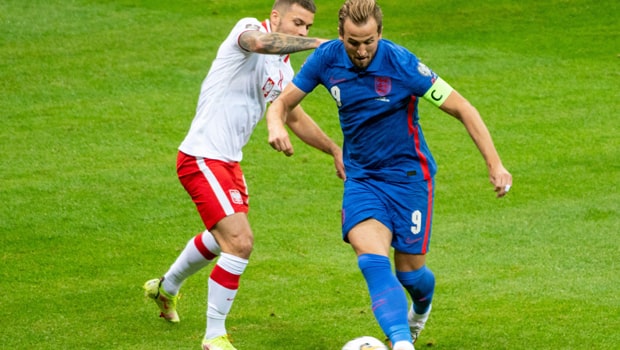 England has won its previous five matches before the match in Warsaw including 4-0 wins against Hungary and Andorra last week.

The Poles also eased past Albania and San Marino in their last two games before the Three Lions’ visit.

After a goalless first half Harry Kane scored a long range strike in the 72nd minute, his 41st goal in the England shirt.

However, Damian Szymanski equalised from Robert Lewandoski’s assist to share the spoils on the night.

Spurs skipper and goalscorer Harry Kane reckoned that the late equalizer from Damian Szymanski was a bitter pill to swallow.

“A tough one to take right at the end, I thought we handled the game well, not an easy place to come and we were seeing the game out well. Sometimes the pressure comes away from home but we are top with four games to go. Rebounds and second balls fell their way and the guy headed it in. That is football. Two tough away games in this camp but four points clear and we are in a good position.” Kane said.

While the 100% record of England has ended in the World cup qualifier, Gareth Southgate’s side still sit at the top of the table with 16 points from six matches played.

They are four points more than Albaina in second while Poland are in third with 11 points.

England will face Andorra and Hungary in next month’s international window before ending the qualifiers with Albania and San Marino.

Meanwhile, Wales were held to a 0-0 draw by Estonia in Cardiff. The Welsh had defeated Belarus 3-2 in their previous game.

They remain in third with 7 points level on points with second placed Czech Republic who have played a game more.