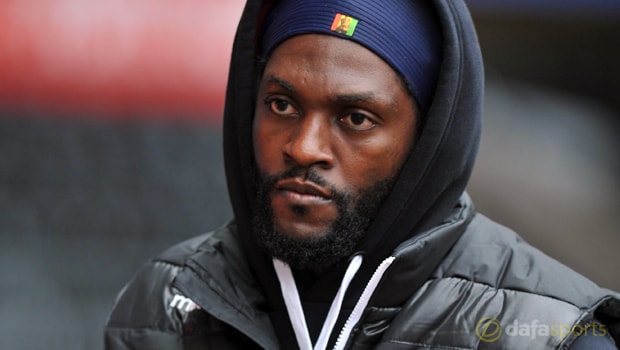 Former Crystal Palace striker Emmanuel Adebayor wants to find a way back into the Premier League and he will do everything possible.

Adebayor has been without a club since being released by Palace last summer after the striker only managed to score one goal – which came in the 2-1 defeat to Watford – from 12 Premier League appearances.

The 32-year-old was linked with a potential move to Lyon at the start of this season but it fell through after a bizarre interview took place between both parties.

Reports claimed the Togo international asked for whiskey in the meeting while he was also said to be smoking during the talks – all which have been denied by the player.

Adebayor fired in the goals when playing for Arsenal, Manchester City, Tottenham and Real Madrid and arguably still has the quality to find the back of the net.

The Lome-born star is currently captaining his country at the Africa Cup of Nations
and hopes a strong tournament will boost his chance of returning to play in England.

“I think people can see I am ready, that I am still a footballer,” Adebayor told the Guardian after impressing in a 0-0 draw with Ivory Coast.

“I love England, love the Premier League and want to find a way to get back there. “I want to hit the top level again, that’s for sure.

If not, I just want to play football and have fun, so if I get an offer somewhere then I’ll go.”

Togo, who are 81.00 to win the Africa Cup of Nations, take on Morocco on Friday in a group match and are 4.50 outsiders to win the game.