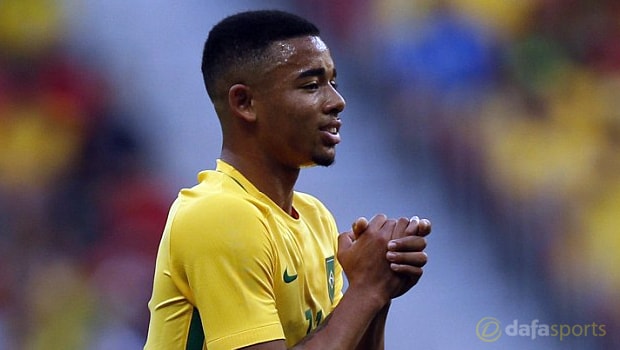 Former Real Madrid midfielder Emerson believes Gabriel Jesus will be able to develop at a quicker rate in Europe as he prepares to start his career with Manchester City.

The 19-year-old agreed to join Manchester City from Palmeiras over the summer but remained with the Brazilian outfit until the end of the domestic season.

The forward has emerged as one of Brazil’s top-young talents over the last few years and is now seen as a regular with the national side.

Jesus enjoyed a successful 2016 as he claimed Olympic gold and the Campeonato Brasileiro title before embarking on his next challenge.

City, who are priced at 15.00 to win the Premier League, now have Jesus available for selection and he will need to prove his quality to force his way into Pep Guardiola’s first team.

Emerson, who spent time playing in Europe, believes the teenager will benefit from his new surroundings and expects he will be a huge success.

“Brazil produces these kind of things, we have this marvellous thing that we can have talented people anywhere, and Gabriel Jesus is one of these talents,” Emerson said.

“He’s young, he’s a kid that still has a lot to learn, but despite being so young he’s already successful. And I wish he does very well because his success is the success of the Brazil squad.

“He’s a great player. Going to Europe is a good thing for a player. He will grow quicker, he will start to understand football in another way and also be respected inside the football scene.

“I guess that for Gabriel Jesus it was a good thing to leave Brazilian soccer, he did everything he had could in [Brazil]. He’s going to a very difficult, competitive [type of football] but I think that he can be successful.”