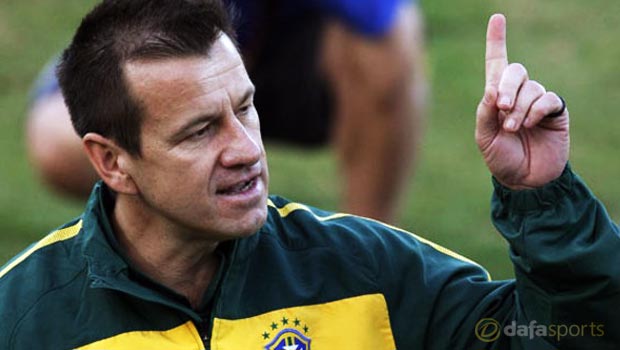 Dunga has denied Brazil’s chances of winning the Copa America rest entirely on the form of striker Neymar after he took his international tally to 44 goals.

The Barcelona superstar inspired the five-time world champions to a 2-1 stoppage-time win against Peru on Sunday in the country’s first match of the showpiece tournament in Chile.

A howler at the back involving defender David Luiz saw Christian Cueva open the scoring for Peru after just three minutes, but Neymar struck back immediately with a free header.

The 23-year-old also rattled the crossbar before setting up Douglas Costa with an exquisite defence-splitting pass for an injury-time winner in Group C.

Neymar scored 22 goals in La Liga as Barcelona completed a historic Treble last season but Dunga claims his side’s chances of glory do not rest solely on the former Santos star.

“There is no doubt that Neymar is a decisive player, but he has come here after three finals in Spain,” he told reporters.
“It’s an enormous sacrifice. He comes into this tournament with plenty of commitment. He wants to win, wants to help as he did in Barcelona. He hadn’t played a Copa America yet.

Brazil are still searching for redemption following a 7-1 humiliation by eventual winners Germany at the World Cup on home soil last year, but have won 11 games on the spin since a 3-0 defeat by the Netherlands in the third-place play-off game

Dunga was delighted with the collective effort of his players after falling behind against Peru and praised their character.

He added: “Neymar was decisive, but other players were decisive as well – including Dani Alves, Miranda, Douglas Costa.

“When you put it into greater context, you’ve mentioned Neymar, you said he assisted a goal, and so did Dani Alves, he too was a decisive man. You said Neymar scored but Douglas also did, so there were contributions from the whole team.”

Brazil are quoted 1.20 in the Group C winner betting and are currently priced 4.00 to win the competition.