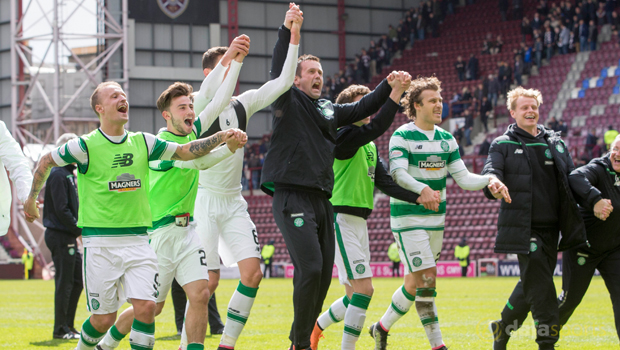 Ronny Deila will depart Celtic at the end of the season but the Norwegian has urged the club to go on and win ten Scottish titles in a row.

Celtic defeated Hearts 3-1 at Tynecastle on Saturday to all but clinch their fifth successive title.

Goals from Colin Kazim-Richards in the first half as well as Patrick Roberts and Leigh Griffiths after the break secured three points for the champions.

While second placed Aberdeen answered by defeating Motherwell at Pittodrie, the title is all but Celtic’s.

The Hoops are nine points clear with just three games remaining and, with a goal difference that is 35 better off than Aberdeen’s, it would require a miraculous turn of events to deny Deila his second league title now.

While he will not be there to oversee things, Deila says he will look in from the outside and he feels the Hoops should be targeting the historic ten-in-a-row, despite Rangers return to the top flight next season.
“I hope that will happen,”

he said. “I will always be a big Celtic supporter and I will follow everything that happens but it is easy to talk about the future.”

Rangers dumped Celtic out of the Scottish Cup semi-finals on penalties recently and Deila says it is important that everyone involved with the Parkhead club retains the hunger and desire that has brought them success in the past.

“We have been the best in the last four years and we can be this year as well. And when you are the best, the only thing you have to be is hungry,”

he added. “Everyone has to want to get better every day to improve because you have the advantage over the other teams and that will continue if the work has been done and done even better.”