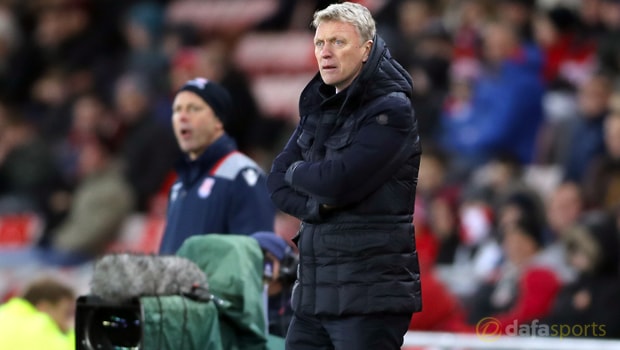 Marko Arnautovic scored twice in seven minutes to put the visitors in control midway through the opening half and the contest was all but over when Peter Crouch made it 3-0 after 34 minutes.

Jermain Defoe gave Sunderland a glimmer of hope before half-time but they could not further reduce their arrears.

It means Sunderland have dropped to 19th spot after losing three of their four most recent Premier League games.

Reflecting on the latest setback, Moyes rued the ‘dreadful mistakes’ that had handed Stoke the game without the visitors having to do very much.

“We just made three dreadful individual mistakes for goals,” said Moyes. “We gave the ball away, made mistakes.

A couple of one-twos we could have cut out and a goalkeeping mistake for the third one meant that we were 3-0 down and we hadn’t done anything. Not that Stoke did anything either.

“We found ourselves 3-0 down and we were out of the game by then.” The Scot praised his players for at least persevering after the interval, despite the fact they couldn’t gain a second goal that would have posed real questions of Stoke.

Plenty of Sunderland fans had seen enough by half-time, with many leaving the Stadium of Light long before the end. Moyes admitted he’d have been tempted to take early leave himself had he paid to watch.

“I might have left early today when we went down 3-0 down,” he said. “But what I will say is that if you stayed for the rest of it was we stuck at it, we got a goal back.

We kept at it in the second half and tried to get a second goal to rally but we just couldn’t quite get it.”

Sunderland are 1.30 to be relegated this season while they are 5.00 to win their next game away at West Brom on Saturday.