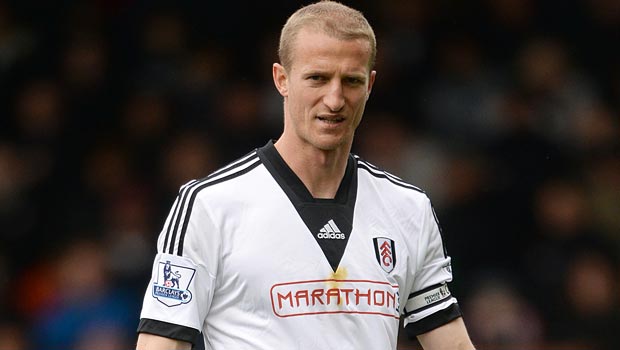 The 33-year-old has signed a one-year contract with Palace, bringing Premier League experience to the London club after six-and-a-half years with the Cottagers.

And after seeing Palace defy the odds to avoid relegation last season, Hangeland hopes his new club can do the same again in 2014-15.
“All the people I spoke to told me that’s what’s going on at Crystal Palace and I really wanted to be a part of that,” he said.

“It’s a traditional club with a big following. I thought the atmosphere here was fantastic and obviously the fans had a lot to be happy about come the end of the season.

“If we can do something similar to that this season, that would be great. I’m really looking forward to playing in front of those fans as soon as possible.”

Palace got off to a poor start last season but their fortunes changed following the arrival of boss Tony Pulis in November.

The former Stoke manager started work with the club stuck in the drop zone with only four points, but he guided them to an 11th-place finish with 45 points.

Hangeland is the third new arrival of the summer at Palace following on from goalkeeper Chris Kettings, who was signed from Blackpool, and former Cardiff City striker Fraizer Campbell.

Crystal Palace are 3.60 to be relegated from the Premier League this season and 9.00 to finish bottom.