Claudio Ranieri urges Leicester City not to look back 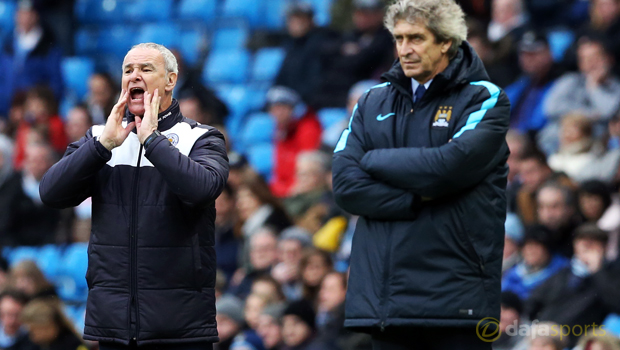 Boss Claudio Ranieri says there is no pressure on his Leicester City team to win the Premier League title.

The Foxes have emerged as shock contenders this season, losing just two of their opening 25 league games.

On Saturday, they stunned Manchester City, with their latest outstanding performance helping them secure a 3-1 win at the Etihad Stadium against the team that went into the weekend as their closest pursuers.

It will be more of the same next Sunday when Leicester travel to the Emirates to face Arsenal, currently joint-second and five points adrift of Ranieri’s side.

The Italian insists that all the pressure is on the likes of Arsenal, Spurs and City – teams that have spent vast sums of money in pursuit of silverware.

While denying there is any pressure on his squad to finish the job off, Ranieri is urging his players not to start contemplating the size and scale of upset they could be about to pull off.

He added: “It’s the first time in their lives that they are doing something special. So it’s important not to look down or behind you. Like a climber, you need to look up. If you look down, you go: ‘Oh My God, look where we are!'”

Leicester are 3.25 to win the Premier League this season while they are 4.50 to defeat Arsenal on Sunday.