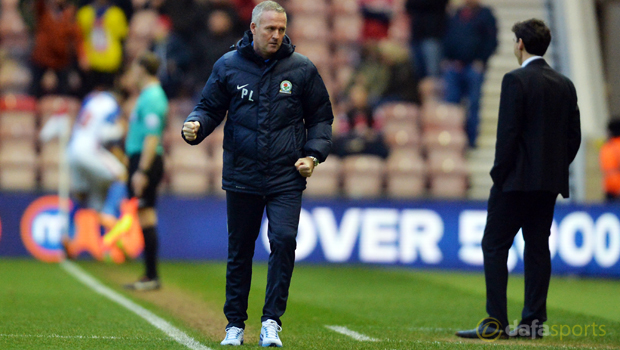 Paul Lambert praised his Blackburn Rovers side for the performance they put in against Middlesbrough at the Riverside before challenging them to produce similar efforts every week.

Rovers were denied a win away at high-flying Middlesbrough by a late David Nugent goal after debutant Jordi Gomez had shot the visitors into a deserved second half advantage.

Lambert was thoroughly impressed with what his side produced against Aitor Karanka’s men, who are joint-top of the Championship with Hull City.

“It shows what the team are capable of, but it is about turning that in week-in, week-out,” said the Blackburn boss.
“It is the way that I want us to play. I want to try and play entertaining football and try and attack and that is what I will always do.”

His side are now unbeaten in four games and Lambert says the only way to build on Saturday’s result is to bring the same attitude and determination to ask questions of the opposition in every game.

“We don’t want to sit there and wait for things to happen, I want us to be on the front foot. That was the type of performance that I’m looking for throughout the season,” he added.

Blackburn will have another chance to test themselves against top opposition this weekend as Hull are the visitors to Ewood Park.

Lambert is happy with the squad he is building and feels goalscorer Gomez and fellow January arrival Elliott Ward will boost the players already at his disposal.

“We are getting there, I’m not 100 per cent happy but you never will be. But if we can try and keep getting players in of the likes of Gomez and Ward, that type of quality to help the lads that are here, then we’ll have a right good squad,” he added.