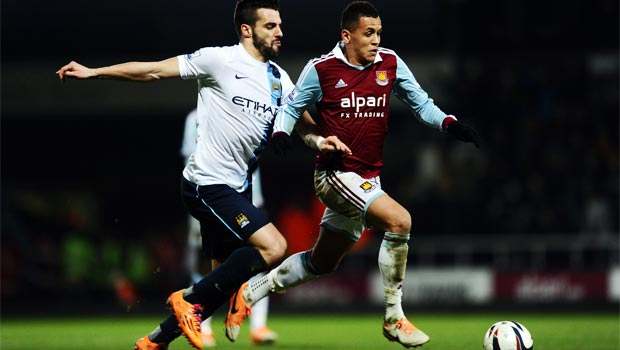 Manchester City boss Manuel Pellegrini has an injury concern over striker Alvaro Negredo who damaged his shoulder in the Capital One Cup win over West Ham on Tuesday night.

The Spain international landed heavily late on during the 3-0 semi-final second-leg victory at Upton Park although he still managed to complete the 90 minutes as the Citizens cruised through 9-0 on aggregate.

Earlier, Negredo had sent City on their way with a brace of goals after opening the scoring in the third minute before grabbing his second just before the hour mark in east London, with fit-again strike partner Sergio Aguero also on the scoresheet.

Pellegrini’s men will now face Manchester United or Sunderland in the Capital One Cup final at Wembley on Sunday, March 2 although the Chilean will be hoping it has not come at a cost of losing Negredo.

“It was a very professional performance,” said Pellegrini. “It was easy to think the game was finished from the 6-0 in the first leg, but it was important to reach the final winning all the games.

“For Sergio Aguero, it was useful match as he played 60 minutes.

“Alvaro Negredo has a problem with his shoulder. He has pain at the moment and we will see if it is serious on Wednesday.”

Pellegrini has previously admitted he wants to win all four trophies this season and so will be an interested spectator on Wednesday evening when United host the Black Cats at Old Trafford.

Gus Poyet’s men are 2-1 ahead following the first leg at the Stadium of Light and are 7.28 for another victory while United are 1.39 to win the second leg on their own turf.

The Red Devils’ Premier League title challenge has come to nothing so far during David Moyes’ first season in charge and while a trip to London for Capital One Cup final would be welcomed, it is also nowhere near matching the expectation levels of the club’s supporters.