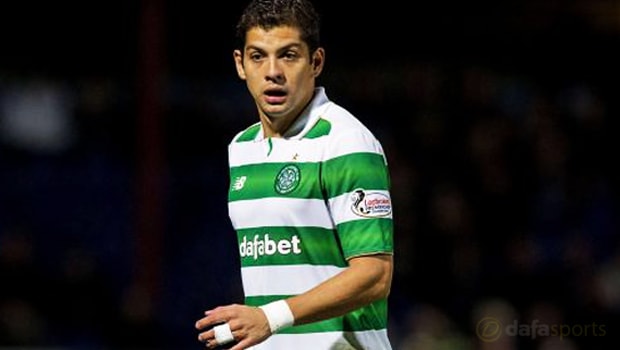 Christian Gamboa believes he is settling into life at Celtic after a horrendous start to his Bhoys career.

The Costa Rican defender made his Celtic debut in their 7-0 loss to Barcelona in the Champions League back in September – the Glasgow club’s worst-ever European defeat.

That was a baptism of fire for the former West Brom man but he insists he is now gaining match fitness and adapting to the style Brendan Rodgers wants Celtic to play.

Gamboa featured once more as Celtic claimed a Champions League draw against Borussia Monchengladbach in Germany recently and he says that game paints a picture of the progress he has made in two months.

“When I came here I hadn’t played many minutes so I have tried to build myself and prove myself,” he told the Celtic View.

“I feel good and happy for my team-mates and it was a good result for us. It could be better but everything is positive.

“That was my seventh game for the club and I feel good. I am working on my fitness and you could see I was a bit better with that in Germany as I adapt to the way we play.”

Gamboa, 27, is relishing the chance to play on Europe’s grand stage and he feels that he is learning quickly under new boss Rodgers.

“Now, I know how we play and the gaffer has helped build my performance and how we play at Celtic, and I showed a bit of that against Borussia.

“I showed that I could play on a good stage and in a good game and these are the matches you want to be involved in,” he added.