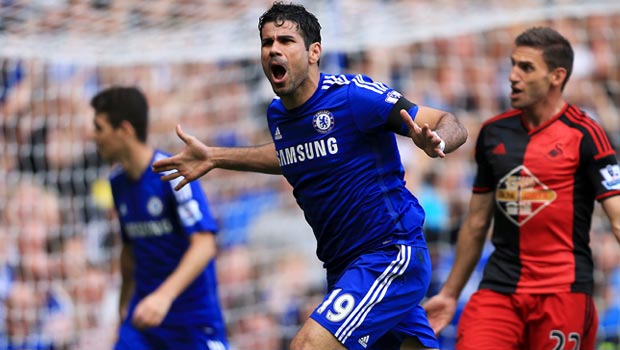 Jose Mourinho has described summer signing Diego Costa’s barnstorming start to his Chelsea career as “fantastic” following a hat-trick in the 4-2 win against Swansea which took his tally to seven goals in four Premier League outings.

The Blues boss bemoaned his side’s lack of killer instinct at times during last season’s battle for the title and splashed out £32million to take the Spain international to Stamford Bridge from Atletico Madrid in the summer transfer window.

Costa has subsequently taken to the Premier League like a duck to water with goals against Burnley, Leicester and a brace at Everton, capped off with his treble against the Swans on Saturday.

The 25-year-old became the first player to score in his opening four Premier League appearances since Micky Quinn in 1992 as Chelsea maintained their 100% start to sit three points clear at the top of the league table.

A delighted Mourinho said: “Seven goals is a surprise. Nobody expects one player to score seven goals in four matches, and they’re not penalties, it’s from free play.

“Everybody was expecting him to succeed, to feel comfortable, to adapt to our team and to our Premier League.
“To score seven goals is obviously a fantastic record.”

Mourinho was quick to play down comparisons between Costa and Didier Drogba, who scored five times in his opening nine matches back in 2004.

The Portuguese tactician added: “I’m not looking for this (30 goals a season).

“If the team plays well he has to score goals. But the way he is playing and the team is playing if he keeps scoring a few goals, a few goals give points and points help the team to be in the top part of the table.”

Costa is 23.00 to take his domestic form into Europe and be the Champions League top scorer this season.