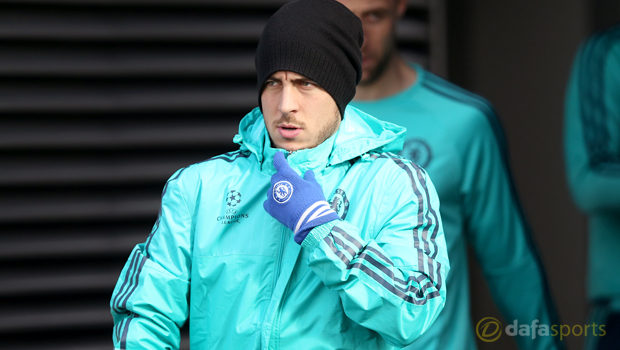 Chelsea’s Eden Hazard has admitted it would be difficult to turn down a move to Paris Saint-Germain ahead of the two clubs’ clash in the Champions League last 16.

The Blues are preparing to make the trip to the French capital for the first leg of their tie with the French champions, who are 1.67 to win Tuesday’s encounter.

The Premier League champions are 5.50, while the draw is 3.75, as the two sides prepare for what will be their third meeting in three seasons in the knockout stages of the Champions League.

The Parisians got the better of Chelsea last year, eliminating them on away goals, and will be confident of dumping them out again after losing only once in all competitions this season.

The west Londoners have endured a recent revival under Guus Hiddink and are 12 matches unbeaten themselves, while they recorded their biggest league win of the campaign on Saturday by defeating Newcastle 5-1.

While the likes of Diego Costa and Cesc Fabregas have improved since Hiddink replaced Jose Mourinho, Hazard has continued to struggle for form.

The Belgian has yet to register a Premier League goal this season and has now cast doubts over his happiness at Stamford Bridge by revealing his interest in a switch to PSG.

The French champions have been linked with a move for the 25-year-old previously and Hazard has admitted he could move on if he felt he had a better chance of winning the Champions League in Paris.

Hazard told Le Parisien: “It’s hard to say no to PSG, as with all teams capable of winning the Champions League.

“Now PSG are part of this category. And for me, winning the Champions League is the main objective. But for now, I do not dwell on it.”

Chelsea are 17.00 to make Hazard’s dream come true and win the Champions League this season, while PSG are 15.00.