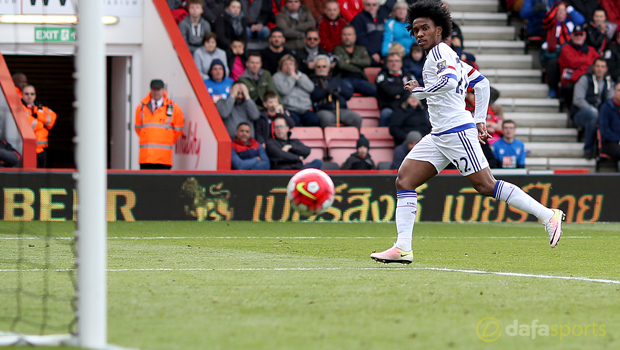 Chelsea winger Willian is adamant his side will be competing for the Premier League title next season under new boss Antonio Conte.

The former Juventus coach will move to Stamford Bridge at the end of the European Championship after he tries to guide Italy to glory in the summer.

Conte will replace Guus Hiddink, who was drafted in before Christmas after the Blues sacked Jose Mourinho just months after he guided Chelsea to the league title.

The Blues are currently ninth in the league table, 29 points behind leaders Leicester City, but Willian believes they will respond quickly under their new boss.

“This season was difficult for us,” Willian told Sky Sports’ Soccer Saturday. “It was strange. Sometimes we played good football but we didn’t have the luck. Sometimes we couldn’t score.

“When we started this season we wanted to win the title, to win the league again, to win everything. But we didn’t. I think now we know what we have to do next season.

“We want to finish this season quickly because we want to start the next one better, and next season win some titles.

“Next season will be difficult as well because the other teams will buy players.

Other managers will come and it will be a difficult season for everybody.” Hiddink’s men take on Tottenham on Monday night and Willian has echoed comments from his team-mates, with the players desperate to stop Spurs winning the title.

Chelsea are priced at 2.70 to beat Mauricio Pochettino’s men, who could have already lost out on the title if Leicester beat Manchester United a day earlier. The draw is available at 3.30 while Spurs are the favourites at 2.63.