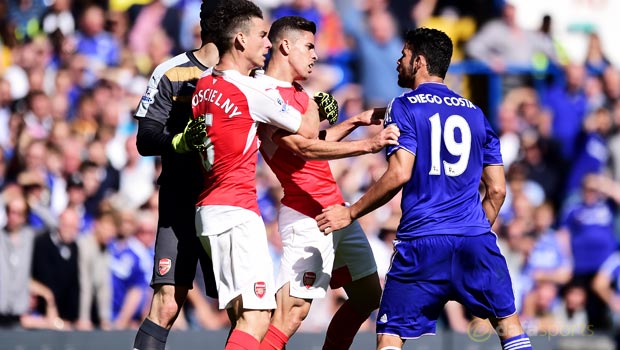 Controversial Chelsea striker Diego Costa has been charged with violent conduct by the Football Association after his actions in Saturday’s 2-0 win over Arsenal.

Kurt Zouma and Eden Hazard netted for the Stamford Bridge outfit to help get their campaign back on track after a shaky start, although they have only climbed up to 13th in the Premier League table.

Costa was involved in a number of scuffles in the match which subsequently led to Gabriel’s dismissal.

The Chelsea striker initially clashed with Laurent Koscielny and clearly put his hands into the face of the Frenchman before Gabriel got involved.

The FA have also charged Gabriel with improper conduct and both clubs for failing to control their players in the heated affair.

Referee Mike Dean didn’t take any action against Costa at the time, leaving the FA to step in and deal with the situation retrospectively.

The former Atletico Madrid man has until 6pm on Tuesday to respond to the charge, which is for the incident with Koscielny.

Should Costa accept the charge then he will serve an automatic three-match suspension with immediate effect but if he chooses to contest it an independent regulatory commission will have the final say.

The defending Premier League champions take on Walsall in the Capital One Cup then Newcastle and Southampton back in the league in their next three domestic fixtures.