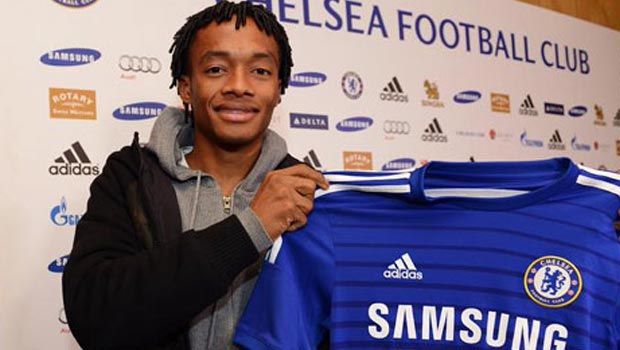 Chelsea’s big transfer deadline day signing, Juan Cuadrado, says he wants to secure as many titles as possible for the Blues with the Premier League title his main priority.

The Colombian’s arrival at Stamford Bridge capped off a busy final day in the winter transfer window for the west Londoners, with Andre Schurrle completing his move to Wolfsburg.

Egyptian winger Mohamed Salah was another player to leave on Monday as he joined Fiorentina on loan for the remainder of the season as part of the deal that saw Cuadrado move the other way.

Cuadrado caught the eye of many of Europe’s big clubs at last summer’s World Cup as Colombia reached the quarter-finals of the tournament, with the 26-year-old and James Rodriguez leading the way.

Manchester United and Barcelona were strongly linked with Cuadrado during the summer but failed to meet Fiorentina’s asking price.

Chelsea have now paid a reported £26.1million for the South American, who has signed a four-and-a-half-year contract with the Premier League leaders.

Cuadrado, who has scored six times in 23 appearances for Fiorentina this season, is now ready to dive straight into the heat of a title battle as the Blues look to hold off Manchester City at the top of the table.

Cuadrado told Chelsea’s website: “I am very happy and thankful for this opportunity I’ve been given.

“This is a great club and, honestly, it is like a dream to join the Chelsea family and to know that the manager believes in me. I’m happy.

“We are a big club so we can win important things. Playing for this team, the league championship is I think the most important thing. As for everything else, Chelsea have big players so we want to win big things.”

Cuadrado could make his debut this weekend when Chelsea take on Aston Villa in the Premier League.