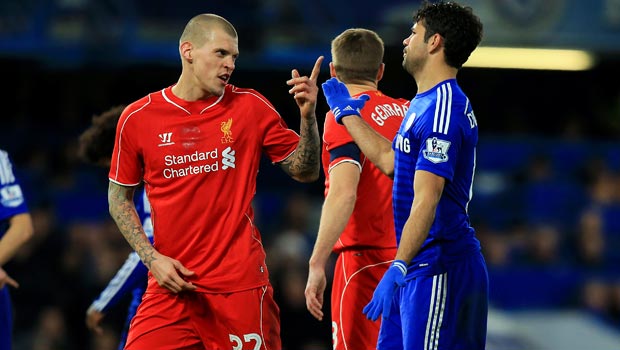 The fiery encounter had finished goalless after 90 minutes and, with the aggregate score level following last week’s 1-1 draw at Anfield, extra-time was needed to separate the two sides.

The Blues were eventually able to book their place at Wembley with a winner from defender Branislav Ivanovic but the focus after the game was on Costa’s behaviour, rather than a showpiece encounter against either Tottenham or Sheffield United.

The Spaniard potentially faces retrospective action from the Football Association after referee Michael Oliver missed both incidents involving Can and Skrtel.

Liverpool boss Brendan Rodgers felt Costa could have avoided making contact with the players on both occasions, hinting he thinks the striker has a mean streak to him.

“He could easily hurdle over the young player and he directs his studs right on to his ankle, which could’ve been nasty,” said the Reds boss.

“Again the one with Martin Skrtel, there’s no need to do it. That’s the sad thing. He’s a top-class player and he’s clever enough that the officials don’t see it.”

However, opposite number Mourinho saw the incidents differently, claiming they were “absolutely accidental” and that Costa was “looking to the ball” on both occasions.

Should the FA take action against Costa then he could miss Saturday’s top of the table clash with Manchester City.

The Blues, who are currently five points clear of City, are 2.05 to win the game, with the defending champions 3.61 and the draw 3.28.