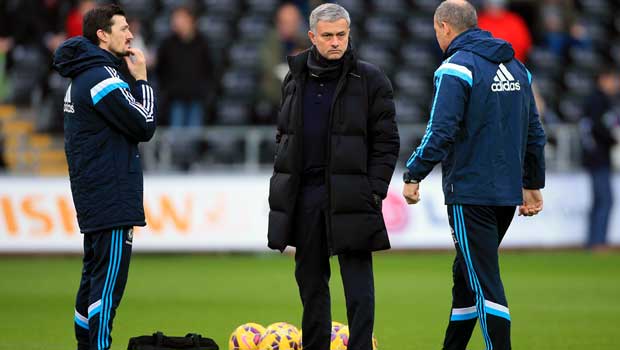 Chelsea boss Jose Mourinho insists his side’s impressive performances will count for nothing this season unless they win trophies.

The Blues continued to show their dominance in the Premier League as they thrashed Swansea City 5-0 at the Liberty Stadium.

The Swans were expected to cause Mourinho’s side a few problems considering their own impressive form. Although they were without Wilfried Bony, Swansea’s difficulties came from their own defence.

Midfielder Oscar and striker Diego Costa both scored a brace before substitute Andre Schurrle scored late on to put the pressure on Manchester City.

Chelsea moved five points clear of Manuel Pellegrini’s men and Mourinho claimed after the win it was the “perfect” performance.

However, he said it will count for nothing if they don’t win the league title at the end of the season.

“It was a perfect game – everything went in our direction,” Mourinho said. “But there is no history without titles so if we play fantastic and don’t win cups no-one will remember this team.

“I don’t think they feel it. They have to win but they know that.

“We don’t feel pressure, we feel responsibility. And for a team like them with the experience they have – much more than us – it’s not a problem.

“This team is a young team with lots of years in front of them, but we are trying this season to make some history by winning something.”

Chelsea take on City in their next league encounter and they are 1.98 to win, with the draw 3.29, while City are 3.44 to claim all three points.