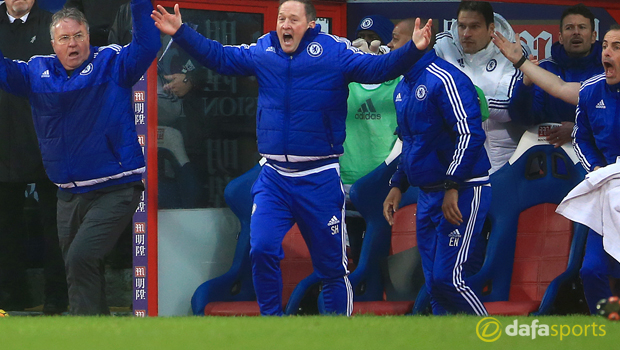 Chelsea boss Guus Hiddink says there is more intensity and a greater depth of talent in the Premier League now compared to his previous spell at Stamford Bridge six years ago.

Hiddink secured FA Cup success for the Blues when he was last in west London and, last month, he took over the reins once more after the club parted company with Jose Mourinho.

Chelsea had lost 9 of their first 16 Premier League games under Mourinho this season.

Hiddink has managed to steady the ship, with the Blues unbeaten in six league games under his tutelage.

They have earned just two wins in that run however and dropped vital points in recent home games against West Brom and Everton.

The Baggies snared a point through James McClean’s late goal last Wednesday while Chelsea needed a controversial late leveller of their own in Saturday’s 3-3 draw with the Toffees.

Hiddink, whose team are four points above the relegation zone, says things are tougher now in England’s top flight.

He feels the lower tier clubs now have the financial muscle to bring in top players.

“Generally, I think the intensity in the league is higher and nowadays you see there are many clubs who can compete on a high level, due to the fact they also have more possibilities to sign players,” Hiddink told Chelsea’s official website.

Hiddink highlights the progress of Leicester, Crystal Palace and Watford as evidence of change within the English game and he says Chelsea can no longer afford to take any game for granted in the league.

“These were teams normally nearer the bottom or the second tier, but they are doing very well,” he added.

“Because they have made good signings, everyone now is capable of beating everyone else and you can see that in the results.”

Chelsea go to Arsenal on Sunday, with the Blues 3.75 to win at the Emirates Stadium, with the Gunners installed as the 2.05 favourites while the draw is on offer at 3.40.