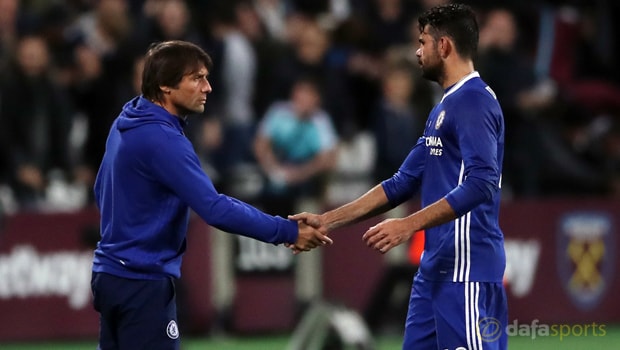 Chelsea boss Antonio Conte insists that a back injury was the reason behind Diego Costa’s absence from the 3-0 win over Leicester at the King Power Stadium.

The build-up to Chelsea’s trip to face the Premier League champions was completely overshadowed by rumours and speculation surrounding the future of leading goalscorer Costa at Stamford Bridge.

The former Atletico Madrid man is apparently the subject of big-money interest from China, with Costa expected to be offered in the region of £30m per year to relocate.

It was reported this had led to a fall-out with manager Conte, an exchange of views that ended with the Blues boss telling his striker to ‘go to China’ according to outlets in the Italian’s homeland.

Chelsea swept aside the challenge of Leicester to maintain their advantage at the top of the league and, afterwards, Conte addressed the situation regarding Costa – insisting any problems are likely to dealt with in-house.

“If you want to know the truth. I am ready to tell the truth,” he told a press conference.

“On Tuesday, during the training session, Diego stopped because he felt a pain in his back, and from that moment he didn’t train during the week.

“And for this reason today he wasn’t available for the starting eleven, or for the bench, or to come with the squad.

This is the reason. This is the truth about Diego. “I read a lot of speculation about this topic.

I can tell you that, if there are problems with the players, then I am used to, in my career, solving them in the changing room, not outside, not in a press conference.”

Costa has scored 14 times and assisted with a further five as Chelsea flourish under Conte’s tutelage this season.

The Blues are 1.73 to be Premier League champions while Costa is 4.00 to be leading goalscorer in the top flight.