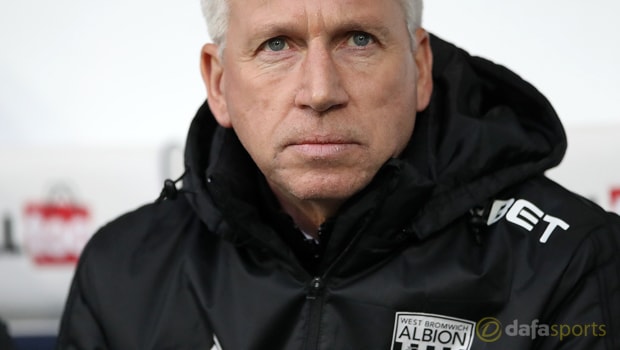 Alan Pardew isn’t panicking on Jonny Evans’ future at West Brom and the new Baggies boss says there are no bids in for the central defender.

Former Manchester United man Evans, 29, is rumoured to be interesting his old club as well as Arsenal, with the January window fast approaching.

Pardew says Albion will make a considered contract offer to the Northern Ireland international when the time is right, while also insisting that Evans’ attitude has been first class since he took over from Tony Pulis at the Hawthorns.

Pardew is realistic when it comes to other Premier League clubs courting his player.

“You have to be realistic in these situations,” said the Baggies boss.

“Jonny Evans is a top player and there were other clubs who were interested in him in the summer – I know that and so does he.

“We all have to be intelligent and straightforward about how we deal with it.

He’s under contract with West Brom and that’s how it remains until such time as there’s a bid that makes it any different.

“When you talk about a new contract, he knows he can have those conversations with us.

If we can keep Jonny, of course we’ll give him the deal we could possibly go to in terms of length and the financial side.”

Pardew’s problems have been at the opposite end of the pitch, with goals a big concern for West Brom recently.

Whatever his thoughts on the future, Pardew says Evans has been a model professional lately.

“He’s been up for the battle for us and hasn’t caused me any kind of negativity that sometimes players in that position can do,” the manager added.

“On my report he gets a big tick, and in terms of a new contract it’s a big tick too. But that’s for Jonny’s agent and the club to come to.”