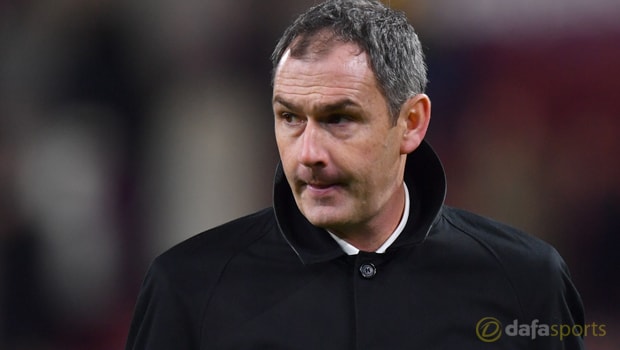 Swansea have sacked manager Paul Clement with the club currently rooted to the bottom of the Premier League standings.

Clement only took over the reins at the Liberty Stadium in January and he successfully guided the club to Premier League safety during the second-half of last season.

However, things have not gone so smoothly for the 45-year-old this term, as he has seen his side win just one of their last 10 top-flight games, a run of form that has seen them plummet to the bottom of the standings and they are currently four points adrift of safety.

The former Derby boss’ final match in charge proved to be Monday night’s 3-1 defeat at Everton, while his assistants Nigel Gibbs and Karl Halabi have also been relieved of their duties.

Swansea chairman Huw Jenkins confirmed it was a difficult decision to sack Clement, but they have decided to act in an attempt to boost their chances of surviving in the division.

“To change the manager, especially at only the halfway point of the season, is the last thing we wanted to do as a club,” Jenkins confirmed.

“We had three different managers last season and as a result we all wanted to give Paul as much time as possible to turn things around.

“But we felt we couldn’t leave it any longer and needed to make a change to give us the best chance of an uplift and a turnaround in fortunes with the club bottom of the Premier League.”

The Swans next match is a crucial clash with a resurgent Crystal Palace at the Liberty Stadium on Saturday, although they are yet to confirm who will be in the dugout for that contest.

The Welsh club are priced at 3.00 to claim all three points against Palace, who are available at 2.50, while the draw is on offer at 3.10.