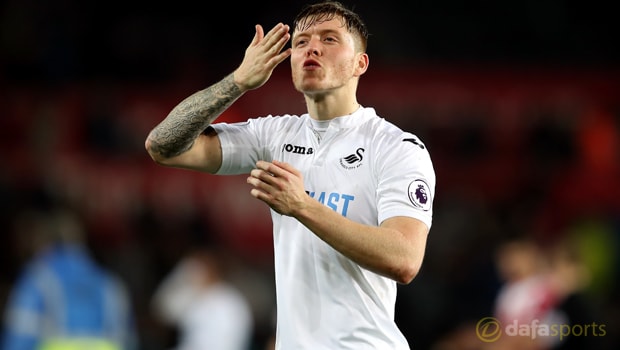 Swansea defender Alfie Mawson has urged the club’s fans to get behind the team when they play host to Everton on Saturday.

The Swans are in desperate need of all three points as they sit in 18th place in the Premier League table, two points adrift of safety.

Swansea go into the game having picked up four points from the last six available after a draw at Manchester United and a win over Stoke.

Mawson says if they can replicate their performance at Old Trafford they can cause Everton problems and he feels the fans’ support could prove the difference when Everton visit South Wales.

“The atmosphere at the Liberty against Stoke was unbelievable,” Mawson told the club’s official website.

“It was the best I’ve experienced at our place since I’ve been here. It gave the team a massive lift.

“They were our 12th man that day, and hopefully they will create the same atmosphere when we play Everton.

“To be fair, the fans who were at Old Trafford last weekend were immense too. All we could hear were our fans singing away in the corner. It felt like a home game to us on the pitch.

“We know, as a team, that we need to repeat the performance that we had against Stoke and Manchester United if we have any hopes of beating Everton.

“But the support of our fans is so crucial in that too. With their backing, we can achieve what we want to on Saturday.”