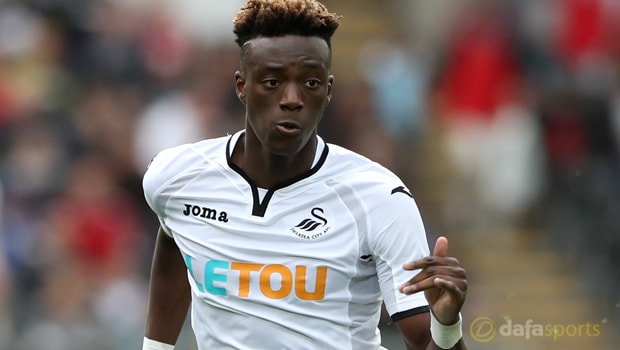 Swansea boss Carlos Carvalhal insists striker Tammy Abraham needs to improve some aspects of his game to shine in the Premier League.

The England international joined the Swans in the summer after signing on a season-long loan deal from champions Chelsea.

Abraham hit the ground running and scored five goals during the first two months of the season, form that won him his first England caps against Germany and Brazil in November, but the 20-year-old has struggled for consistency.

He is now out of the first-team picture, with Jordan Ayew getting the chance to lead the line for Swansea.

However, with Wilfried Bony out for the season, Abraham could soon find himself back in the frame.

Carvalhal has urged Abraham to take his chance, with midfielder Leroy Fer also out for the rest of the campaign.

“When a swan falls, another swan begins to fly. It is unfortunate that they can’t play this season. Fer was doing really very well and Bony is growing up day by day,” said Carvalhal.

“In attack, it will open more opportunities to Tammy Abraham. We believe a lot in the player. He knows what he must learn. He must be strong and when he does this he will be a more complete player.”

Swansea are in action on Tuesday when they take on Notts County in an FA Cup replay. They are 1.50 favourites to win, with the draw 4.20. The League Two side can be backed at odds of 7.00.