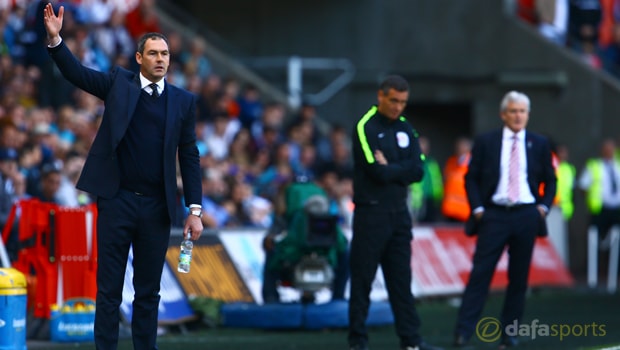 Swansea manager Paul Clement was quick to praise his squad’s performance as they gave themselves a chance of survival by beating Stoke City 2-0 on Saturday.

The Swans, 1.53 to go down, went into the game under pressure after three consecutive defeats but Clement’s men delivered at the Liberty Stadium.

Goals from Fernando Llorente and Tom Carroll, and a missed penalty from Stoke’s Marko Arnautovic, helped Swansea pick up all three points.

Despite winning, Swansea remain in the bottom three, two points behind Hull City after the Tigers beat Watford 2-0 at home.

After a recent poor run, Clement now believes the fight for survival is now on.

He told Sky Sports: “Hull have won again today and if we hadn’t the gap would have gone to five points with four games left, and that would have made things very difficult for us.

“It’s a very important win, the gap stays the same but, more importantly, we put in a good performance and deserved to win.

We rode our luck a little, especially when they were awarded a penalty, but it’s game on for the next four games now.

“I’m very happy we were able to play well and win, especially after some of our recent performances.

We knew we had to start well and give our fans something to cheer about. They were absolutely fantastic.

“Our form at home has been good, we are confident playing here, we know the fans are behind us and we’re glad we sent them away today having won.”

Swansea travel to Manchester United next Sunday, before taking on Everton, Sunderland and West Bromwich Albion.