Carlos Carvalhal: We can survive 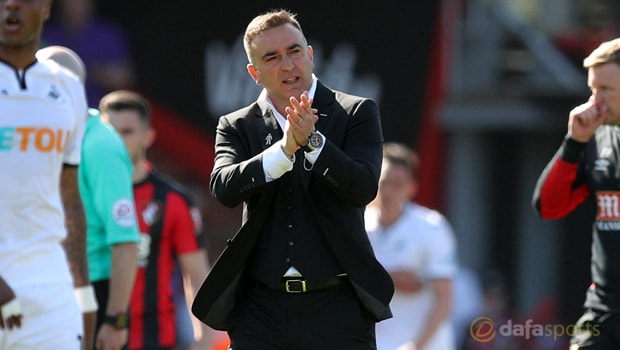 Swansea coach Carlos Carvalhal insists his side can still stay in the Premier League despite dropping into the bottom three.

The Swans, 2.75 to be relegated, lost their third straight game to fall into the drop zone as they were beaten 1-0 by Bournemouth at the Vitality Stadium.

Ryan Fraser’s goal was the difference on the south coast but the Welsh outfit did have chances of their own but failed to beat Cherries keeper Asmir Begovic.

Carvalhal’s side have not won since March 3 but they remain level on points with Southampton after their draw against Everton.

Swansea now face the Saints on Tuesday at home before ending the campaign with a clash against already-relegated Stoke City.

Despite their poor form, Carvalhal is adamant his troops can avoid the drop this month. He told reporters: “I am not worried because we depend on ourselves.

“When we arrived if I would have said we have two games to finish the season and it would be possible to stay in the Premier then no one would have believed me.

“It was really bad and no one would have believed me. We have these things in our hands, we can do it, let’s do it.

In the Liberty Stadium we are more strong, my team play better at home, the fans are making a big impact.

“When you depend on yourself, we can do it. You don’t need to look at other teams, you must look to ourselves. In reality we play two home games and we are happy about that.”