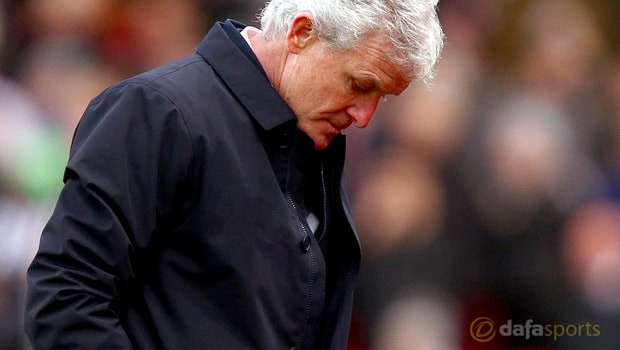 Stoke City have parted ways with manager Mark Hughes in the wake of their shock FA Cup third-round exit at the hands of League Two Coventry on Saturday.

The Potters went into the match having won just one of their previous seven Premier League games, a run that had seen them slip into the top-flight relegation zone.

Back-to-back defeats against Chelsea and Newcastle meant the pressure was on Hughes ahead of their trip to the Ricoh Arena, but they were unable to gain the result they were looking for, as goals from Jordan Willis and Jack Grimmer sealed a 2-1 success for the fourth-tier outfit.

Stoke were quick to act following that defeat, as they confirmed on Saturday evening that they had parted ways with Hughes, bringing the Welshman’s four-and-a-half year tenure at the Stoke Stadium to an end.

A statement on the club’s Twitter feed said: “Stoke City can confirm that the contract of manager Mark Hughes has been terminated with immediate effect.

“We would like to thank Mark for all he has achieved for the club over the last four and a half years, notably in guiding us to three successive ninth place finishes in the Premier League, and we wish him every success for the future.”

The Potters also confirmed they are looking to appoint a new manager as quickly as possible, with the likes of Martin O’Neill, Ryan Giggs and Michael O’Neill having all been linked with the role.

Stoke will certainly be hoping to have a new manager in place when they travel to Old Trafford to take on Manchester United in their next match on January 15.

The Potters are priced at 13.00 to emerge from that contest with all three points, while United are available at 1.25 and the draw is on offer at 6.00.