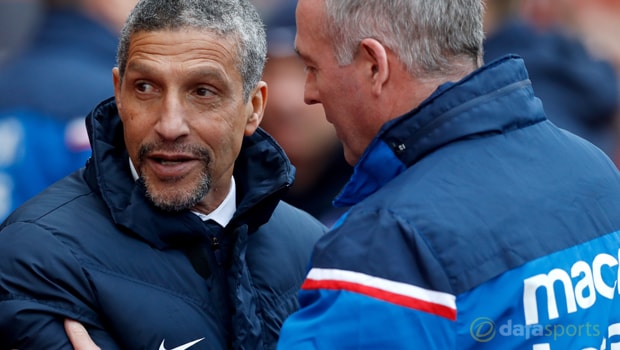 Stoke City manager Paul Lambert insists he would not be blaming individuals after his side missed a late penalty in their 1-1 draw with Brighton at the Stoke Stadium.

Brighton opened the scoring through winger Jose Izquierdo as he scored his second goal in a week.

His first-half strike was cancelled out by Xherdan Shaqiri in the second period and it was the Potters pushing for victory.

They were awarded a 90th-minute spot-kick when Dale Stephens brought down Jese Rodriguez.

The former Real Madrid man wanted to take the penalty but it was Scotland’s Charlie Adam who stepped up and saw his effort saved by goalkeeper Mathew Ryan.

Stoke dropped into the bottom three last weekend and they remain in 18th, but Lambert insists the blame should not be placed on a single player.

He told reporters: “I’m devastated for the players.

“When you get a penalty in last minute it’s a big opportunity to win the game. But the penalty’s a lottery, a hit or a miss.

“Nobody likes to see that [players fighting over who takes a penalty].

Charlie scored the last one against Coventry and he felt confident he was going to score. So I am a great believer that if you feel confident, step up and hit it.

“And the incident you are talking about, lads are desperate to score and desperate to win and I think that is the big thing.

But you do not want to see that probably in public, that is the thing I would go against.

“He did [want to take the penalty] and I will never curtail that in anybody if you have a great desire to score.

I would rather have that than not and people shying away from it and that is one thing he never done. But the second half was very good.”