Stoke City coach Paul Lambert refuses to give up 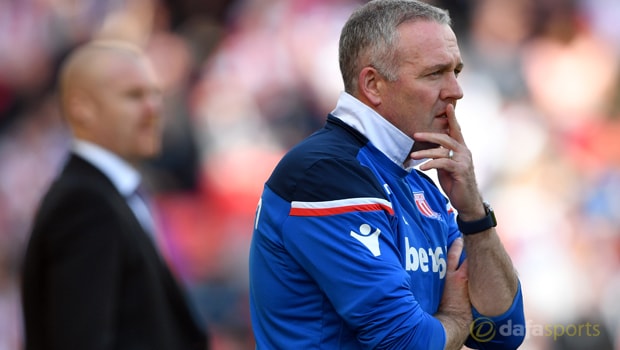 Stoke City coach Paul Lambert has refused to give up after seeing his side’s chances of survival dented by Burnley on Sunday.

The Potters are now 1.04 to go down after a 1-1 draw against the Clarets last weekend. Midfielder Badou Ndiaye opened the scoring before Ashley Barnes found an equaliser to help Burnley’s push for European football.

Stoke remain 19th in the Premier League table after 35 games and they are still four points from safety.

Lambert’s side will take on Liverpool, Crystal Palace and Swansea in their remaining games and Lambert as refused to give up just yet.

He told Sky Sports: “They’ve been brilliant, the supporters, they’ve backed us.

There’s one thing, when you look at the football club the way it is, you wouldn’t think we’re in the position we’re in the way they get behind us.

“Until it’s mathematically impossible for us to do, we’ll keep fighting. Football is a tough game, no game is easy, no game is a given, but until someone tells me this fight is over, we’ll keep going.

“I think the big moment was Diouf’s moment in the first half, towards the end. I think if we’d gone in 2-0 up at half time I don’t think anybody could have begrudged us of that.

“It’s important, I’m not going to stand and criticise him for anything at all, he might have pulled the trigger earlier, first time, but that’s the story of our season. We’ve had some big moments where we might have taken our chances better.

“We’ve had some luck against us, but the actual endeavour and the work rate, especially of Mame, has been exceptional.”

Swansea remain just outside the bottom three and they are now 4.50 to join West Brom in the Championship next season.