Survival the priority for Aleksandar Mitrovic 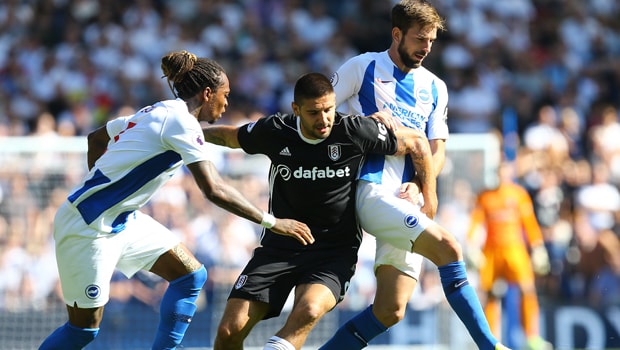 Aleksandar Mitrovic insists his priority is to help Fulham survive in the Premier League rather than his own personal goal tally.

The Serbian has been a revelation since arriving at Craven Cottage, initially on loan, midway through last season, as he has scored 16 goals for the club, which is more than any other player in the top four leagues of English football during the same period.

The 23-year-old also sits top of the Premier League goalscoring charts, after netting four goals from as many matches, including a strike in the Cottagers’ 2-2 draw at Brighton on Saturday.

Mitrovic, who turned is loan move from Newcastle into a permanent transfer during the summer, is certainly pleased by his record in front of goal, but he insists it is much more important the team win football matches and ultimately retain their top-flight status.

Reflecting on the draw with Brighton, Mitrovic told reporters: “My job is to score goals, and I will always give my best. Sometimes I will score, sometimes not. The most important is the points.

“Our target is to stay up, that is our first target in the fastest time we can. Then, everything after this we can look higher.

“Okay, it is nice to score goals, but I say it again I am a team player, and I am very disappointed we didn’t take three points.”

Fulham sit 13th in the early-season standings after collecting four points from as many matches at the start of the season, but they are priced at 5.50 to be relegated at the end of the campaign.