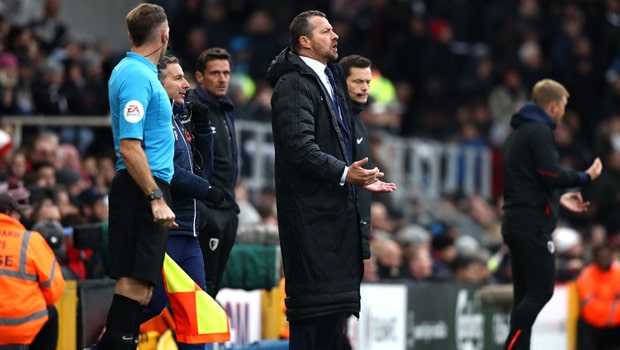 Slavisa Jokanovic is adamant he is the right person to get Fulham out of their current plight as the pressure continues to build on the manager following Saturday’s heavy home defeat to Bournemouth.

The Cottagers lost their fourth consecutive Premier League match at the weekend as the Cherries ran riot at Craven Cottage and Jokanovic’s men sit 18th in the table with just one win picked up from 10 attempts.

David Brooks scored in between two Callum Wilson goals to give Bournemouth a comfortable 3-0 victory and leave the south-coast outfit just six points behind table-toppers Liverpool, who thrashed Cardiff City 4-1 on Saturday.

As for Fulham, who had midfielder Kevin McDonald sent off, they are yet to keep a clean sheet this season and have shipped a league-high 28 goals, leaving huge question marks over Jokanovic’s future.

Next up for the west London outfit is a fourth-round League Cup tie at Manchester City on Thursday and a bad result against the Citizens could spell the end of the Serbian’s time in charge.

Perhaps more crucially, Fulham, who are 2.20 to be relegated, travel to rock-bottom Huddersfield Town on November 5 and the term six-pointer is already being used to describe that contest.

Despite being under intense scrutiny, Jokanovic still believes he can lead the team out of the hole they are in and start picking up positive results.

“I am confident in myself always,” he said.

“I am working here three years, I know very well the players I have in my hand. This is hard work, this is not easy for me, for the team. We need to be brave, we need to push forward, play better football and to win the games.”