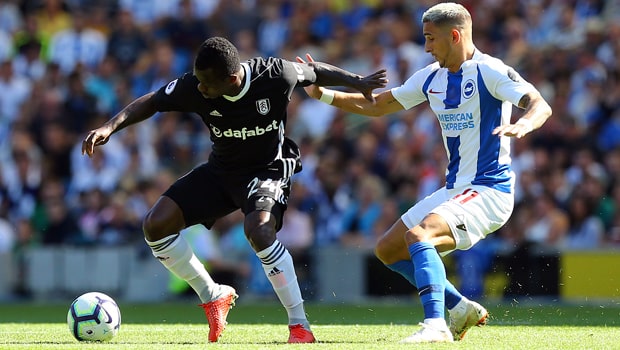 Alfie Mawson says that Fulham team-mate Jean Michael Seri has “frightening” ability after he impressed in the Cottagers draw at Brighton.

While Seri played well in the Fulham midfield, Mawson was though less impressed at letting slip a two-goal lead at the Amex Stadium.

Seri, an Ivory Coast international, joined Fulham from Nice in the summer, signing a four-year deal and was instrumental as his side took the lead at Brighton, setting up Andre Schurrle.

Alksandar Mitrovic added a second but they were unable to hold on for their first away win of the season, Glenn Murray scoring twice for the Seagulls.

Mawson said of his new team-mate: “Seri is a great player. He frightens you sometimes — you hold your breath watching him, but he always gets it right. He brings composure in midfield.”

The defender, a summer signing from Swansea, added that the side were conceding too many cheap goals in their return to the Premier League but stressed that their attacking approach, which served them so well in the Championship last season, can have an impact in the top flight too.

“We have shown how good we are already,” Mawson added.

“At times [against Brighton] we were unbelievable. It was a joy to watch at times.

“We picked a side apart that were in the Europa League [in Burnley].

“We could have lost the game with the momentum that Brighton built up, but we have to take heart that we saved the point.”

Fulham are next in action after the international break on September 15 when they travel to champions Manchester City.