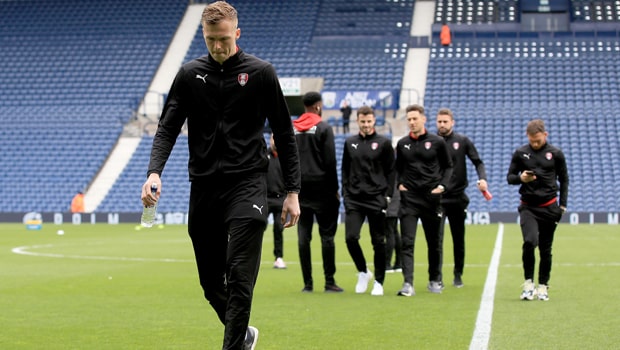 Fulham goalkeeper Marek Rodak looks set to compete for a starting jersey next season in the Championship after Rotherham boss Paul Warne confirmed he is struggling to agree another deal.

The 22-year-old has spent the last two years with the Millers, but he remains a Cottagers player.

Rodak, who joined from MFK Kosice, has never played a game for the London outfit since he joined them in 2013.

He has spent time on loan at Farnborough, Welling United and Accrington Stanley but it now appears that he may get a chance at Craven Cottage.

Rotherham were relegated to League One last week, while Fulham’s stay in the top flight has also come to an end. After making 80 appearances for the South Yorkshire club, Warne confirms Fulham are ready to give Rodak a chance next season.

He told reporters: “I had a conversation with Fulham and they were saying that they wanted Marek as part of their squad next year. It’s like I’m pushing a door that’s locked.

“I’ll still have another conversation. Marek has been a big part of us for two years and I’m grateful to Fulham for allowing him to develop here. But as I sit here now I don’t think him coming back here is happening.”

Fulham currently have four goalkeepers on their books with Sergio Rico, Fabri and Marcus Bettinelli all in front of him in the pecking order.

However, at least two of them are set to move on this summer, meaning Rodak will now get a chance to stake his claim for a starting spot.

Fulham fans will get to see their team in action one more time this season when they face Newcastle at home and they are 4.33 to win and both teams to score.