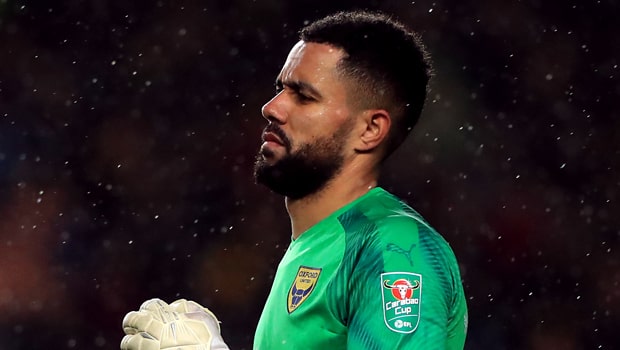 Championship side, Fulham are closing on a deal for free-agent goalkeeper Jordan Archer.
According to reports which were confirmed to Football League World Chief Editor Sam Rourke, the Championship club could secure the signature of the 26-year goalie within some days.

Archer was recently in action at Karl Robinson’s Oxford United in League One, where he provided cover for Simon Eastwood over the festive period with six appearances for the U’s.

Now a free-agent, Championship promotion chasers could seal an agreement for the Walthamstow-born goalkeeper. This is coming on the heel of reports that Marcus Bettinelli is most likely to leave Craven Cottage.

Archer had a wonderful spell at Millwall, where he made 144 appearances at the New Den from 2015 until 2019.

Having begun his career in London with Tottenham Hotspurs, he gained several experiences through loan spells before settling at Millwall. His performance at the London club didn’t go unnoticed, leading to him receiving a call-up to the Scotland national team in 2018.

Currently sitting in the fourth position in the Championship table, Fulham is looking to return to the English top-flight immediately after being relegated last season. They are, therefore, launching a push for promotion. Their recent result before coming back to winning ways in their last two outings was nothing to talk about.

The coach Scott Parker after their win lauded the squad for the grittiness in getting the maximum point against Hull City away from home.

Meanwhile, the London club is yet to decide on the future of midfield player, Jean-Michael Seri.
The future of the playmaker has been much talked about topic in the winter market so far.
According to reports emanating from Galatasaray, where Seri is on loan for the season from Fulham, the Turkish giant is willing to send him back, while others said they might retain him for the rest of the season.

He is also linked with a move to various clubs in the Premier League and France.
According to FootMercato, Lyon has made two formal offers for Seri in the region of 12m Euros, which have been rejected by Fulham.

According to the report, the asking price for the midfielder is €18m, which is said to be the clause in his contract.