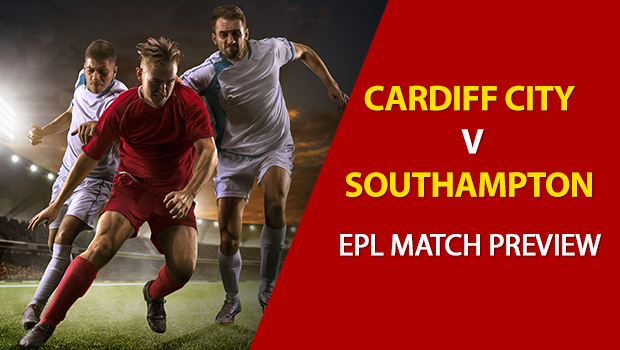 Cardiff City and Southampton clash this weekend at Cardiff City Stadium as both sides look to bounce back with a win. Cardiff fell short 1-3 on the road vs West Ham last time out, while Southampton finished in a 2-2 home draw with Manchester United.

Betting on the Draw: Odds — at 3.23 — indicate there’s a 31 percent chance the match ends in a draw. There’s a draw in under 29 percent of AccuScore sims, suggesting no added side value on the draw.

Strong First 45: Southampton have been known to get off to quick starts, something that was evident last time out vs Man U. Stuart Armstrong (13′) and Cedric Soares (20′) had them up early before their defensive woes surfaced.

Last 6: Cardiff have four losses and two wins in their last six overall; both wins came at home. Southampton have four draws and two losses; both losses were on the road.

Head to Head: It’s been about four years since these sides last met in Premier League action, with Cardiff winning 1-0 last time out in April 2014.

Charlie Austin has a 22 percent chance to score for Southampton. Austin averages 2.12 shots overall per sim, 0.77 shots on goal per and 0.25 goals per sim.

Odds — at 2.94 — indicate there’s about a 34 percent chance Cardiff City win this matchup. They win 40 percent of AccuScore sims, suggesting some added side value on the pick. Cardiff winning is a four-star (out of four) AccuScore hot trend pick.