Van Dijk refusing to give up 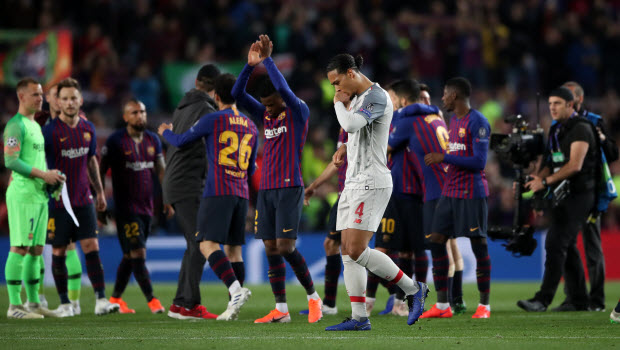 Liverpool defender Virgil van Dijk says his side are still capable of reaching the Champions League final despite a 3-0 defeat to Barcelona at the Nou Camp on Wednesday night.

Reds boss Jurgen Klopp made four changes to his side as he tries to keep his team fresh ahead of their Premier League title push. The German claimed his side produced their ‘best away Champions League performance’ but the brilliance of Lionel Messi now means Barcelona have one foot in the final.

Former Liverpool striker Luis Suarez opened the scoring before Messi grabbed a brace, with his final goal bringing up 600 goals for the Spanish giants. Van Dijk admits his team should have taken some of their chances to grab an away goal but the Dutchman is refusing to give up.

“3-0 sounds very bad,” said Van Dijk. “It sounds like we had a proper shocker, but we created big chances against them and should have scored at least one. “Then it would be a totally different feeling to what we have now, but we have to take it how it is.

“I know it’s going to be very tough to come to Anfield. We all have to believe, I will definitely believe, so we’ll see.” His words have been echoed by fellow defender Andrew Robertson, who believes the home fans will play their part.

“Just as we were getting into the game, fans were starting to boo and get on top of them and we had them where we wanted them, but that’s what they can do here,” said Robertson.

“We need something special on Tuesday, but if there’s any place to do it, it’s Anfield.” Liverpool are 2.00 to win the second leg, while they are as high as 11.00 to qualify for the final.