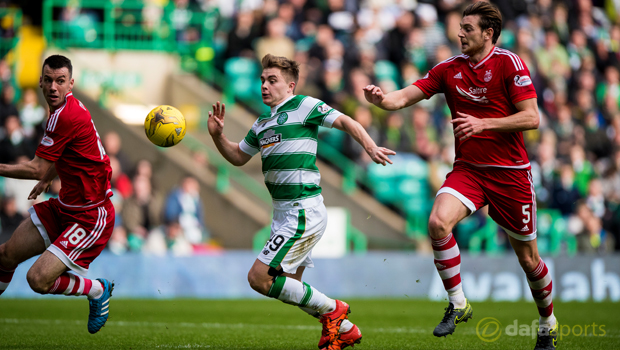 Celtic winger James Forrest insists he is enjoying playing under Ronny Deila and revealed that he is closing in on securing a new deal.

The 24-year-old is a product of the Celtic youth academy and signed he first youth contract in 2003 before making his debut for the senior side in 2010.

Forrest has since gone on to make over 100 appearances for the Scottish champions and hopes that he can continue to develop as a player at Parkhead.

Despite suggestions of a lack of competition for Celtic in the Scottish Premiership, Forrest insists he is happy to stay and wants to commit his future to the club.

The winger has struggled with injuries over the past couple of seasons but he believes he has now shaken off that tag and is able to kick on with his career.

The Scotland international believes that Deila has played a big role in helping him to progress as a player and hopes he can repay the managers faith in the future.

Celtic claimed a 3-1 win over Aberdeen on Saturday with Forrest getting on the scoresheet and he insists he is keen on enjoying more occasions like that under Deila.

“We are talking. I want to stay at Celtic. Everything you do every day is enjoyable and I
want to stay here. A lot of the boys feel the same because it’s such a big club.

“I think I have a year and two months left and I am pretty confident it can be sorted. As I say, it’s a big club and you don’t get much better than the European nights here.

“The manager has been really good for me. I’ve kicked on since the end of last season.

“It was really good for me in the last couple of months of it and I have kicked on again.”