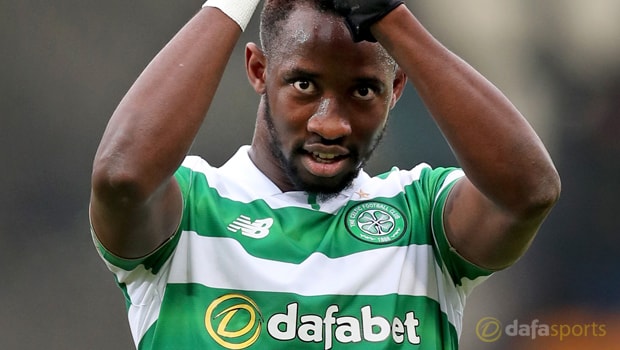 Celtic star Moussa Dembele says the speculation surrounding him during the January transfer window was not a distraction.

The Frenchman arrived at Parkhead from Fulham during the summer, signing a four-year deal, but there was talk he could be on the move in the winter window after some eye-catching displays.

European heavyweights Real Madrid were mooted as potential suitors and Premier League sides Arsenal, Chelsea, Manchester United and Manchester City were all credited with an interest in January.

A move away failed to materialise, however, and Dembele stressed he is simply concentrating on performing for Celtic at present.

“I don’t really listen to what has been said in the media. I don’t really follow it,” he told reporters. “I just try to do my best when I’m out on the pitch and show everyone the level of how good I am.

“It’s easy not to get distracted. I’m a very calm kind of guy and I don’t really let this type of thing get in my head.

“I focus only on enjoying my football at Celtic and I’m very happy to be here.

“I don’t really listen to what has been said about me – I just try to get fit as quickly as possible and back on the pitch.”

The 20-year-old made a stunning contribution on Sunday after coming off the bench at St Johnstone.

Celtic were 2-1 down when Dembele entered the action on 59 minutes but the forward grabbed a hat-trick in the space of 25 minutes as the Glasgow giants ran out 5-2 winners.

Dembele has now managed 23 goals in 39 appearances in all competitions this season.

Celtic have a 27-point lead in the Premiership but their focus is on the Scottish Cup as they host Inverness Caledonian Thistle in the fifth round on Saturday.