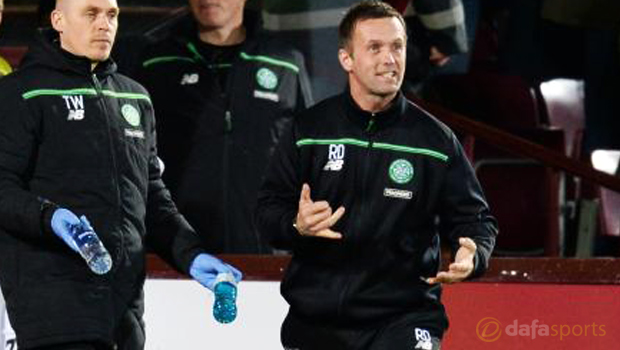 The Bhoys pulled off a 2-1 triumph at Tynecastle, with goals from Tom Rogic and Leigh Griffiths good enough to seal a semi-final spot despite Arnaud Sutchuin’s injury-time strike for the hosts.

It ended a run of three games in six days for the Glasgow giants, who suffered the disappointment of losing 3-1 to Molde in the Europa League last Thursday before bouncing back to thrash Dundee United 5-0 in the Scottish Premiership
on Sunday.

And their latest success means that the Hoops will go into the weekend’s top-of-the-table showdown full of confidence and looking to extend their four-point advantage over the Dons at the top of the standings.

It has been a tough run of games for Celtic, but there is little time to take stock, with Delia now turning his attentions to the upcoming encounter at Celtic Park.

“We’re in the semi-final and we’ll enjoy that, but it’s a big game on Saturday, it could put us in a good situation in the league,” he said. “I’m looking forward to what’s coming up.”

And the Norwegian tactician has urged his charges to maintain their form and keep proving that they can respond to adversity to get the right result.

“We need to perform, we need to be ready,” he added. “I like that the team has shown unbelievable determination, they’ve shown they can bounce back. I’m happy, we’ll keep on going.”

Celtic are 1.40 to beat Aberdeen while the men from the Granite City are 6.50.