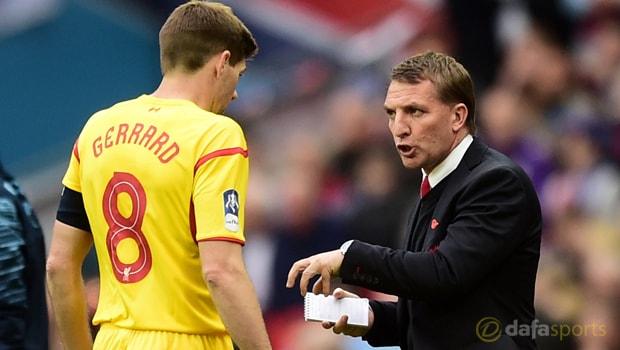 Celtic manager Brendan Rodgers has refused to be drawn on speculation linking former Liverpool captain Steven Gerrard with a move to the Scottish champions.

The 36-year-old confirmed his departure from LA Galaxy this week and is now looking for a new employer.

Unsurprisingly, the midfielder has been linked with a return to Liverpool, who are priced at 3.60 to win the Premier League, but reports have also claimed that Celtic could be an option.

Gerrard would secure a reunion with Rodgers if he opted to go north of the border to the Glasgow outfit, but the Bhoys boss has distanced himself from a deal.

The Northern Irishman has talked up the ability of his former captain, however, but insists he won’t speculate on players potentially arriving at the club.

Rodgers says that the former England international has been working on his coaching badges and feels he could step into that side of the game.

Rodgers said: “With regards to Steven, he’s been an incredible player.

I had a number of years with him at Liverpool when he was absolutely brilliant for me.

“It’s that time of the year now, we’re getting towards the January window, Stevie’s time has finished out there at Galaxy, so there’s speculation about where he might go.

“Of course there’s a natural look at Celtic because of the size of the club, it’s a club he admired, and I’ve got some of my former players here working with me. But we always keep our business behind closed doors.

“[Coaching] is something I’m sure he would want to do. Back [at Liverpool], him and Kolo Toure were doing their B Licence coaching badges – I know that Kolo has just passed his, which is great for him – but they were both great warriors and players.”