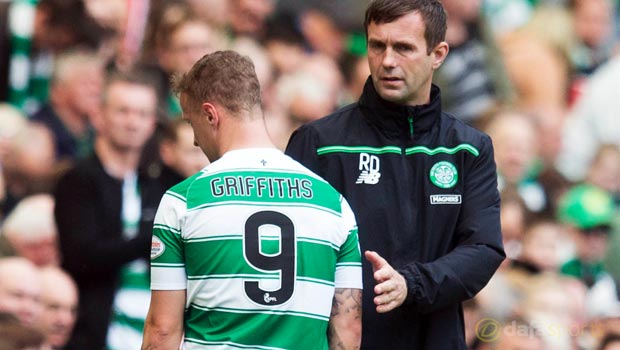 The 24-year-old Scotland international forward, who put Celtic one-up from the penalty spot in the fourth minute of the game at Celtic Park, took a hefty knock to the ankle and was forced out of the contest in the 19th minute.

Griffiths took to Twitter to play down the seriousness of the injury and expects to be fit to face Qarabag as the Hoops take a 1-0 first-leg lead into the tie.

And Deila echoed the striker’s claims by insisting that only Charlie Mulgrew is a doubt for the game this week.

He said: “It’s nothing pulled.

“I didn’t know if he had twisted his ankle or whatever. But it seems it’s just a knock. Hopefully he’ll be ready for Wednesday.”

Nir Bitton and Mikael Lustig were both left out of the game against Ross County on Saturday lunchtime because of respective ankle problems, but Deila revealed they will both feature on Wednesday.

Meanwhile Deila is hoping his side improve on their display against County after being critical of their second-half performance in particular.

“I think the first half was OK,” he told BBC Scotland. “We scored two goals and had control of the game.

“The second half was a poor performance. We were too open and gave the ball away all the time. It seems like we lost our concentration.

“We have to do 90 minutes every time we play and learn from this, but I think you are going to see a totally different team on Wednesday.”