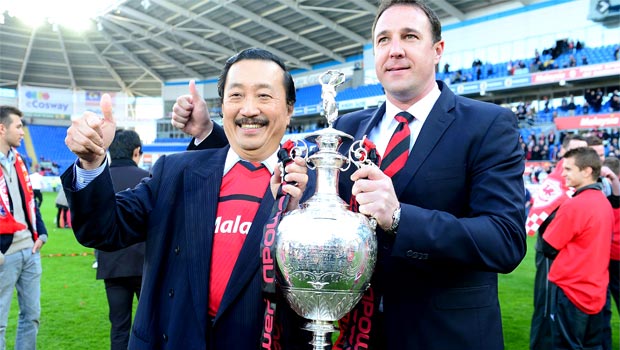 Cardiff City owner Vincent Tan is reported to have told manager Malky Mackay to either resign or be sacked in another twist to the saga in South Wales.

Reports of Tan’s ultimatum appeared on Friday morning on several news outlets andwere given extra weight when Mackay didn’t appear for his press conference ahead of the game with Liverpool.

Instead, assistant David Kerslake met the press and refused to answer questions regarding Mackay’s future, instead trying to keep the focus on Saturday’s trip to Anfield.

“I am here to talk about the Liverpool game. I don’t think it will affect the players. They are a wonderful side, with an array of talent. The players have equipped themselves exceptionally well all season,” said Kerslake.

“They are going to be really tested but we have done really well and we go there looking for a result. Every manager, every coach, knows it is a precarious job, nothing changes.

“Malky is unavailable and I have been asked to do the press.”

The news of Tan telling Mackay he faces losing his job one way or another is the latest incident in a bitter spat between the two which stretches back to when the Scot’s friend and head of recruitment, Iain Moody, was fired by Cardiff in October.

Malaysian businessman Tan stepped up his war of words with Mackay this week, publically criticising the 41-year-old after he revealed he was hoping to sign three new players in the January transfer window.

Tan is thought to have emailed Mackay outlining grievances with his overspending in the summer, his style of play and his dissatisfaction with recent results.

A number of Premier League manager have come out in support of Mackay in the wake of the latest revelation, with Hull City boss Steve Bruce saying Cardiff should be grateful for all the work he has done after getting them promoted to the Premier League last season.,

“They should be thanking Malky you would have thought, at least looking at it from the outside anyway,” said Bruce.

“He has done a wonderful job and is making a great fist of keeping them up. But again, as I’ve said, it is the industry we are working in. We keep talking about it.